Dr. Jessica Fields, an obstetrician-gynecologist, and Maggie Sensenig, a labor and delivery nurse, met on the job. 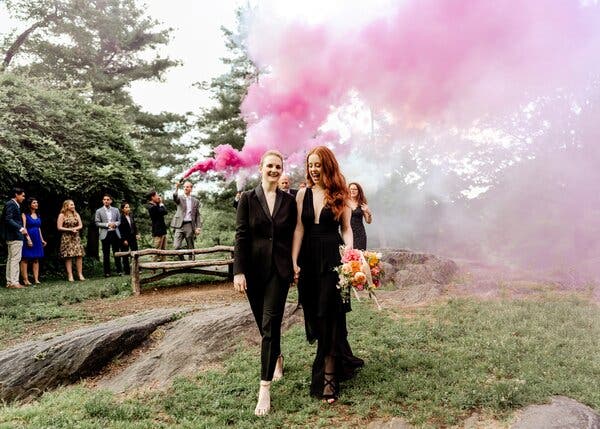 Dr. Jessica Chaplin Fields and Margaret Louise Sensenig have delivered dozens of babies side by side — including for close friends and Dr. Fields’ sister — at NewYork-Presbyterian Hospital/Weill Cornell Medical Center. Now they plan to start a family of their own.

“I just started labor and delivery and she was an OB-GYN resident,” said Ms. Sensenig, a registered nurse, of Dr. Fields. The couple met in 2016 in the labor and delivery unit, which was recently spun off into NewYork Presbyterian-Alexandra Cohen Hospital for Women and Newborns in New York.

They often joined the constant flow of doctors and nurses on the night shift in the center of the unit to work on patients’ charts, and chat about patient care or their personal lives. They developed a friendly rapport, but kept the relationship professional.

In December 2017, when neither was in a relationship, Ms. Sensenig confided to a co-worker: “I haven’t spoken to Jessica a lot, but I could spend my life with her.”

In mid-December they socialized for the first time with a group of nurses and doctors, at an East Village bar. They spoke the entire evening, and had their first kiss. After the bar closed at 2 a.m., they continued their conversation over pancakes and waffles at a nearby IHOP. 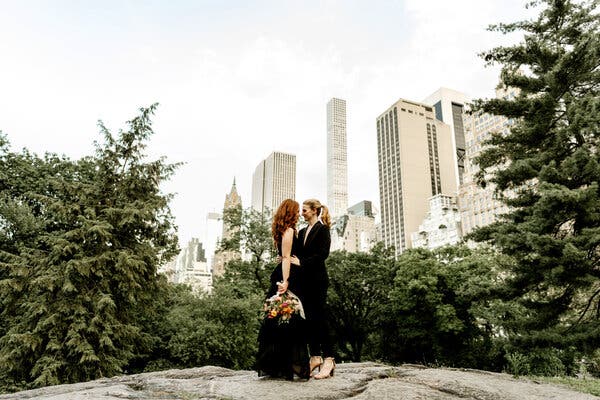 The next day, Dr. Fields, who lived on the Upper East Side, officially asked her on a date, and stopped by her apartment in Hamilton Heights two days later with Ms. Sensenig’s favorite flowers, pink peonies. They then headed downtown by subway to Joseph Leonard, a West Village restaurant.

“Neither of us slept the whole week,” Dr. Fields said. “We stayed up talking. Even to this day one thing I love is the communication.” (Their first two months of texts added up to 200 pages in a bound volume Ms. Sensenig gave her as a wedding gift.)

In January 2018, six weeks later, Dr. Fields and her goldendoodle, Max, moved in with Ms. Sensenig and her rescue Labrador mix, Penelope, and rescue cat, Rory.

“We never looked back, Ms. Sensenig said. “Word got around the unit. Everyone was excited. We had a cheering squad.”

In August 2018, they moved to an Upper East Side apartment, a 10-minute walk to work, with a backyard where their dogs ran around and friends enjoyed barbecues.

On May 16, 2019, Dr. Fields, filled the backyard with roses, and gold foil helium balloon letters that read “MARRY ME?”

“I wish my mom and Maggie could have met and she could have seen the incredible woman I was marrying,” said Dr. Fields, whose mother died in 2016. They planned to get married June 9, 2021, her mother’s birthday.

In 2020, when Covid-19 struck, the couple grew even closer at the hospital, and with visitors restricted, often were the only support for mothers during labor and delivery. In July, after Dr. Fields completed her residency, and began her three-year fellowship in New Jersey, they moved to Jersey City, an equidistant commute for each of them.

On June 9, Dr. Field’s brother, Dr. Adam C. Fields, who became a Universal Life minister for the occasion, officiated at the Cop Cot wooden structure in Central Park before 23 guests. The next morning they took a flight to Cancun, Mexico, with 50 guests, and met 60 others at Unico 20 87 Hotel in Riviera Maya. They repeated their vows during a three-day celebration, which also included a fiesta, a mariachi band, a three-tiered wedding pi?ata cake, and their first dance choreographed to hip-hop and Broadway songs.

“We are so excited to start a family in the near future,” said Ms. Sensenig, who is taking the surname Fields. “I’ll carry it, and she will deliver it.”