One year ago, my inaugural Second Look piece on 2K Marin’s The Bureau: XCOM Declassified went up. I’d just moved over to The Escapist from editing on another website. It was an adjustment, but my how everything has changed since then. Even in my humble little corner, what this column has achieved far extends past digging up a few hidden gems.

I’ve had developers from several featured games reach out to me, thanking me for giving their games a Second Look when most of the industry had moved on. That’s not to mention those of you who’ve told me how you’ve given just as many of these games a chance that you never had before. That’s a gift — to see these efforts come together to bring about something constructive.

These games may be just commercial products, but people put their heart and soul into them. Gave them life. Found a way to express thoughts and feelings in ways most of us could only dream of. That matters and is worth remembering, even if they didn’t set the sales charts on fire. I couldn’t help but think about this while playing 2K Marin’s BioShock 2: Minerva’s Den.

Minerva’s Den centers on the computer labs of the underwater dystopia of Rapture. Left alone to their own devices, the Den’s inhabitants have gone mad, worshipping a computer. Yet, the cult and all their attempts to crush protagonist Subject Sigma, an Alpha-series Big Daddy built to protect Rapture, aren’t the heart of the story. Instead, it’s the voice in Sigma’s ear, Charles Milton Porter, and Porter’s dieselpunk AI computer, The Thinker. 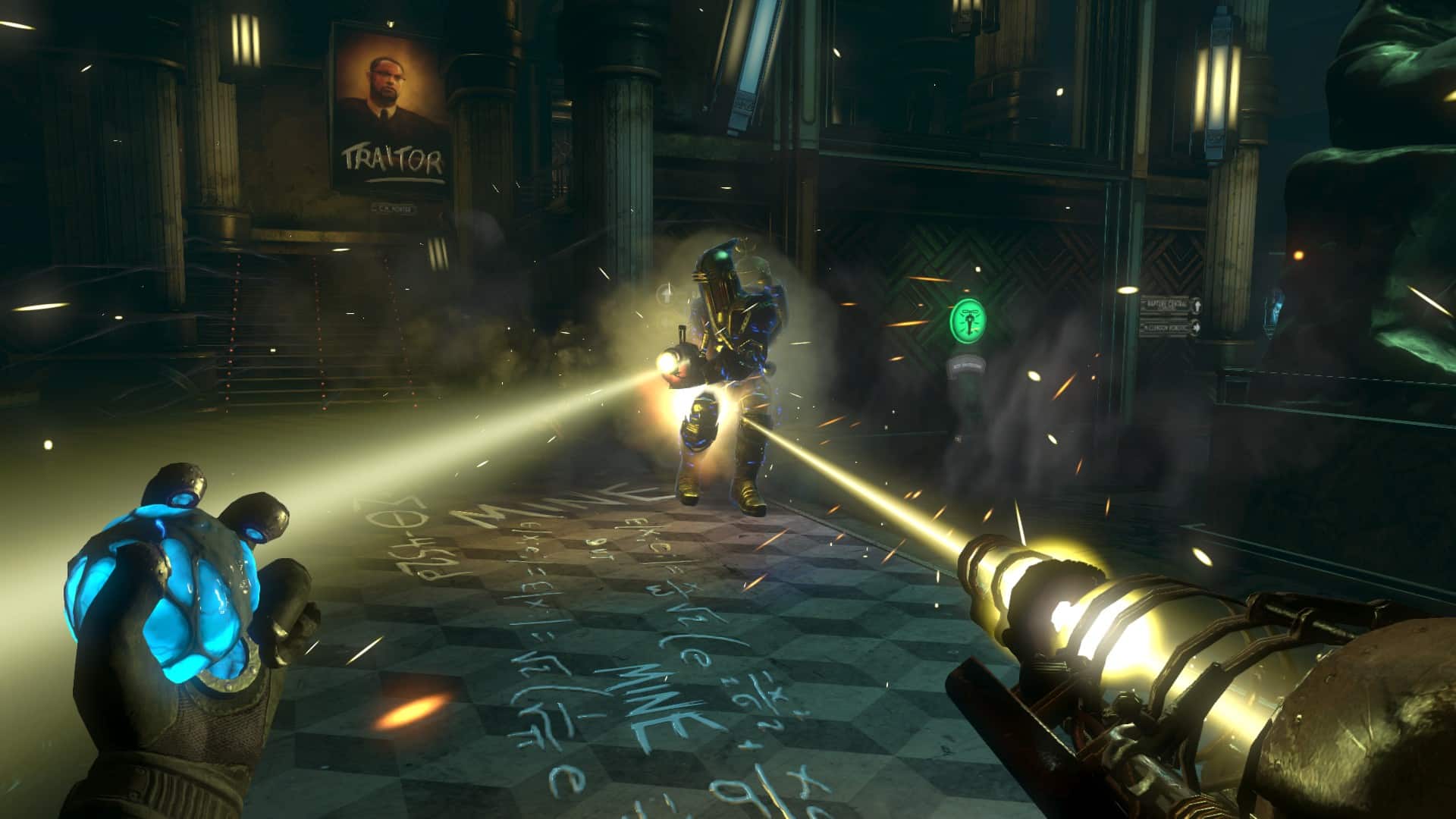 The Thinker exists for two reasons. At the top level, it serves Rapture’s automated needs, managing security systems, home services, and more. That’s what Porter uses to justify it, but his concerns are far more personal. The Thinker can replicate the human psyche — it’s as sentient as you or me. All Porter needs is time to experiment, and he might just be able to digitally resurrect his wife Pearl, lost during the London Blitz while he was too busy working at the lab.

Both Porter and Sigma face constant hostilities at every turn. Porter is one of the few black men in Rapture, still facing prejudice even in the purported Ayn Randian meritocracy. A colleague suggests he splice himself white and make it easier to get ahead, but he refuses. He doesn’t take shortcuts to achieve his goals, instead focusing on doing the best he can to outpace his competition. Meanwhile in the present, Sigma faces choices of a similar nature — to save the Little Sisters or harvest them for more resources, to rely on clever strategy or brute force to make his way through the Den.

This emphasis on choice is unspoken, but constant. Even though it’s a fraction of the size of BioShock 2 proper, Minerva’s Den can take hours before you’ve cleared the first of its two locations. Along the way, you’ll often have to either hack or ambush your way around, most offensive Plasmid abilities kept at arm’s length until later in the DLC. Instead, you can control the automated systems of the Den to deal with the cultists for you or brutally tear apart the cult’s web of defenses with what few weapons you have. 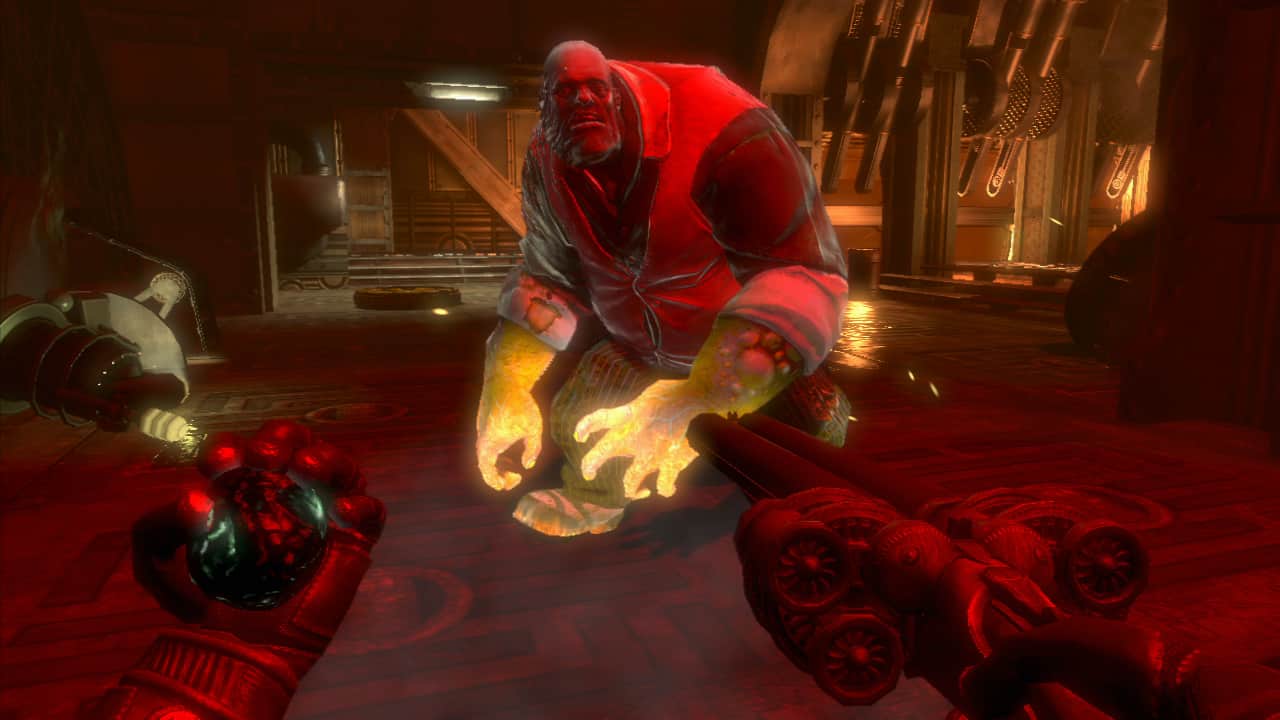 As Sigma clears his way to Porter’s hideaway deeper within the Den, further diaries explore Porter’s ever reaching grasp to resurrect his wife. He struggles against infighting, being accused of treason against Rapture, and yet in the end, when he succeeds in bringing his wife back through The Thinker? It horrifies him. Everything he’d worked towards was for naught. He’d struggled so hard to achieve his goal that he hadn’t considered the consequences of the road he’d traveled.

Yet in Sigma’s case, there is redemption. It becomes clear early on that Sigma is a far smarter Big Daddy, even for an Alpha Series like Subject Delta. The weapons and plasmids Sigma wields necessitate playing smartly. Harness every trick in your favor and you’ll be well-stocked for the challenges ahead despite your low health and limited abilities.

The tighter confines of the Den offer plenty of ambush points for you and your foes, but it’s up to you whether you’re predator or prey. Just keep charging in carelessly like Porter and you’ll be clawing every inch. It’s not impossible to rip and tear your way through, but the struggle speaks to Minerva’s Den’s core lesson — better to think first, before you act carelessly. It’s a fascinating message for what’s easily the more action-oriented of the original BioShock duology, gamifying several new features like the improved hacking and physics to really flex the mechanical sandbox of Rapture.

Minerva’s Den doesn’t rely on cheap tactics to keep you invested. Every step flows naturally, from your first unpleasant brush with the cult to Porter’s candid messages to you as he guides you through the Den to undo his and his colleagues’ grievous mistakes. It plays wonderfully, controlling like a dream, boasting some truly ingenious level design that’s more Metroidvania than either of the first two games. All of this is in service to a clear, central message with a poignant conclusion I won’t spoil. 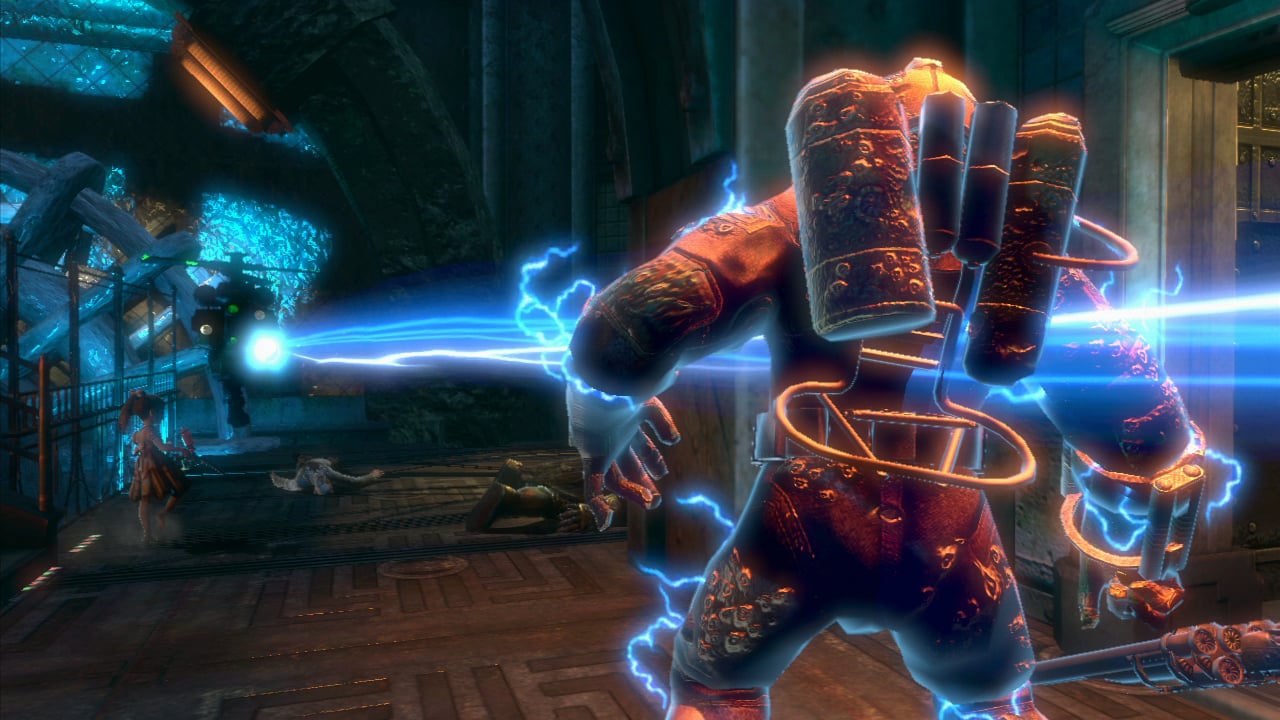 This is what BioShock is all about — not “lighthouses” but impactful journeys. BioShock, at its best, harnesses a vivid setting and brilliant gameplay to convey a tightly wound, razor-sharp story in the vein of The Twilight Zone. It takes what could’ve just been a dieselpunk FPS with some light RPG elements and elevates it into something meaningful. Every detail and facet weaves together into a cohesive whole like few ever have. That’s what makes BioShock and its contemporary immersive sims so special, as well as so hard to get right.

Just like Porter, every team that’s tried to bring the series forward has faced countless challenges, and sometimes the results have been far more horrifying in the wrong ways than the right. Yet, with its thoughtful and artful design, Minerva’s Den is pure BioShock without any frills, distractions, or bloat. One can only hope that the new BioShock studio Cloud Chamber is looking back to classic BioShock journeys like Minerva’s Den to help guide the series’s future. Maybe then, just like Porter and Sigma, the series can find the redemption it truly deserves.

And here’s to another year of Second Look! Thank you all for joining me as we travel on this journey and dig deeper into even more great, absolutely weird games. In honor of the column’s one-year anniversary, I have a question y’all can answer in the comments — what’s your favorite game nobody ever talks about? Looking forward to reading your answers, and rest assured, we’ve got some spooky stuff on the way for October!